Member of the Month - Meg! 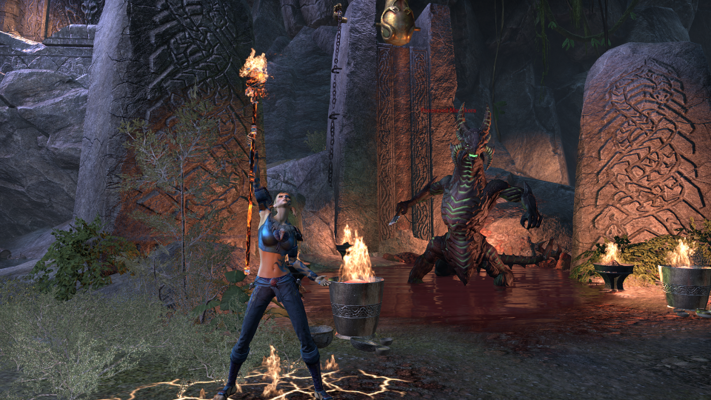 Tell us your Main characters name and any alts you have in Vanquish's ESO division?

My very first MMO character ever, my Main in ESO, and favorite is "shut-up Meg", a High Elf Magicka Dragonknight (damage).
I also occasionally run an Argonian Templar healer, named "Dreams-In-Code", a High Elf Sorcerer, "Ciri Lion-Cub-of-Centra", a new High Elf Warden, "M'e'g", and I have to mention my speedy farmer, an adorable little Ork Nightblade, "Meggnog". Her friend, "nut Meg", a Dark Elf Dragonknight doesn't get out much.
I have a second account with a few characters that are mostly for teleport assistance and bag mules. Most of there names are "Penelope"-something, after my 6 pound Miniature Pinscher dog. ;-)

What are your normal hours of play and what content do you enjoy most in ESO?

The content I enjoy most is scheduled group events like "Friday Night Fights", "Saturday Morning Smackdown", "TAKE THE PLEDGE", and of course, "Monday Night Madness." Running anything with a group of other Vanquish members and having fun together is just the best. I also love it when Oakos, Tormennt, Squee, Duck, or anyone just grabs a group of people who happen to be in TS to run some impromptu dungeon. That always turns into lots of fun.

What is it that draws you to ESO and what about the game are finding you enjoy most?

I was originally drawn to ESO because it was "Skyrim with friends." The whole package together, high quality graphics, realistic sound effects, expressive characters, and fun story line and quests make ESO an immersive experience that I can loose myself in. I enjoy "living" a virtual life in a fantasy world full of exciting creature, people, and fun activities.

When I just feel like doing something relaxing I like to just run around Craglorn, or Bleakrock Isle and farm for crafting mats. What I enjoy MOST is running anything with a large group of Guildies in TeamSpeak with everyone joking and cutting up, you know, easy content like running around in Cyrodiil, Imperial City, or even clearing zones of World Bosses and Sky Shards with a bunch of friends.

Tell us a bit about your past MMO experience?

Before ESO I had no MMO experience. I grabbed ESO after a year or so of playing Skyrim. Vanquish was my first experience being in a guild as well. Since joining Vanquish, I've followed Oakos and Vanquish to various other MMOs, including Wildstar, SWtOR, ArcheAge, The Division, and WoW. Had fun in each of those, leveling characters, doing daily quests and such, almost always with Squee. Squee and I stared questing together in ESO almost from day one and have been doing the same in every game since. Thanks for some really good times, Squee! Do you remember flying around over Draenor?

When did you join Vanquish and why did you chose Vanquish as your main guild, what drew you to the guild?

I joined Vanquish around ESO's launch in April of 2014. After playing a very short time I realized there were benefits to being in a "guild" so I started searching Reddit guild recruitment forums. I had no experience with guilds so a lot of the posts sounded okay. But, when I read Oakos' post, something about Oakos' leadership style and personality really struck me.

It wasn't a hard sell recruitment, just "a day in Vanquish." I knew that was where I wanted to make my home in ESO. Vanquish has been my one and only guild ever since.

What has been your most memorable moment in ESO so far?

Mersy was leading an overland skyshard clearing even in Cyrodiil very early in the game. I was probably still pretty low level. There were a lot of us, 15 or 20 maybe... running over the grassy hills in Cyrodiil on our horses, following Mersy from skyshard to skyshard. I just remember thinking what fun this was, riding a horse over this beautiful landscape with a bunch of friends.

I don't know why, but that's the one memory I always think of when I think of playing ESO.

If you had to chose one weapon what would it be? A sword, a bow, a staff or a rabid raccoon tied to a stick?

I wish I had my bow from Skyrim. Modded and tweaked, it could one-shot a dragon in mid-air.

What crafts have you spent the most time on?

I spend the most time making set pieces of armor and weapons for myself and anyone who asks. I make enchants for the gear, food, and potions as needed. I started leveling all of the crafts and researching traits on my main character (shut-up Meg) from the very beginning. She has been a Master Crafter for a very long time and knows most of the Styles in the game.

Finish this sentence: "You round the corner passing by the Officers barracks coming to a heavy wooden door, the sign posted above reads: - Commander Oakos, Leader of Vanquish - Upon opening the door you are surprised to find...

Oakos, sitting on the edge of his bed playing "Battle of Glenumbra Moors" on a guitar. Sitting next to him is a packed backpack. I ask, "Going somewhere?" "I'm taking a much needed vacation. I'm going hiking in the mountains of Eastmarch. Don't worry, I'll be back in a few days and we'll conquer White Gold Tower, again."

Thank you for the opportunity to share a little bit about myself.
-Meg

Meg 3y ago
Hahaha, this made me laugh out loud. She's even go the body tattoos.
1 Like

Duck 3y ago
Excellent Meg! And excellent answers as well. So glad this MoM thing is back in action. So how did you meet Squee? Or did Squee stumble on you? LOL
1 Like

Meg 3y ago
Squee and I had both loved playing Skyrim and naturally started playing ESO as soon as it came out. As we found out from talking to each other later, we had both read Oakos' Reddit post about Vanquish and applied. One day we were both in TeamSpeak (Ventrillo at the time?) and started talking. Both of us were, like level 7 or 26, I don't remember... low, and and about the same place working on the main story quest. We grouped up and quested and leveled up together. We've been doing quests and dailies and having a good time together in every game Vanquish has had a presence in ever since. Wildstar, ArcheAge, SWtOR, The Division, ARK: Survival, WoW... Did I miss any, Squee?
2 Likes

Squeetard 3y ago
Don't think so. We both joined Vanquish the same day, from the same Reddit post. Jumped on Voice chat within minutes of each other and started yakking.
Great job on this post Meg!
And a well deserved member of the month. I would not be surprised to learn that you've crafted over a thousand gear sets for fellow guildies over the years.
Meg does all my crafting, leaves me more time for drinking, thank you :)
4 Likes

Throm the First 3y ago
Great read Meg, thanks!
0 Likes

Savina 3y ago
Thanks for sharing Meg ! I'm glad Oakos brought Member of the Month back. I was sure there was going to be a martini story in there, guess Meg is saving some of this stories for Team Speak.

Thank you Meg for being an amazing person and so kind and helpful to all. The note beside your name on the roster makes me laugh every time I see it.
2 Likes

Squeetard 3y ago
Meg sips bourbon and chugs martini's. We were talking about this the other day. He said a glass of bourbon lasts 2 hours while gaming. Put a Martini in his hand and he'll go through 6 in an hour. It's the Jalopeno stuffed olives!
0 Likes

Meg 3y ago
God! I love those olives. Thanks for turning me on to them, Squee. XD
Right after the hurricane and while the power was still out I was outside grilling some food and my neighbor, who is British, came over. He mentioned that he had some tonic, but no gin. I had put a 1.5 liter bottle of Bombay Gin in my freezer anticipating a need to keep the freezer as cold as possible during a power outage. I retrieved said gin from the freezer and was introduced to the Gin and Tonic. At least that's a more diluted gin drink. I guess I really like gin. :-)
0 Likes

Chrispi Critters 3y ago
Great read... Love talking to you in TS.. and it's just my opinion, Your a voice of calm and reason.. Mostly... lol
0 Likes

Spritely Green 3y ago
Great write up Meg .... fun to learn more about you! You have such a kind heart and definitely make Vanquish feel like "home".
0 Likes

Meg 3y ago
Thank you for the kind words. You guys are the greatest! You make me feel AT home. :-)
0 Likes

Mersy 3y ago
Thank you for sharing Meg!
0 Likes

Zedd 3y ago
Good stuff Meg now tell everyone how you got the name "Shut_up_Meg' :)
0 Likes

Meg 3y ago
Ug. In ArcheAge my character's name was "Meg." There was a daily, I think, faction vs faction battle event. Like the zergs in Cyrodiil or Dolmens, you spam in zone chat, "Hey, can I get an invite?" I did that and immediately got, "Shut up, Meg!" from one person and then another. I thought I'd made some terrible faux pa. "Invite please?" "Shut up, Meg!" ... "Shut up, Meg!" "What did I do?"

Someone finally told me to go Google "Shut up, Meg." I did and found pages of Meg Griffin and Family Guy cartoons. I had never watched the cartoon before.

Thanks, Zedd, for bringing up such painful memories. ;-) Actually, M-e-g are just the first three letters of my last name, in which the 'g' is silent. In the Navy it was easier for people to just call me "Meg" than to figure out how to pronounce my full name. ;-)
1 Like

Squeetard 3y ago
Meg is a hoarder. He says collector. In real life and in game. He has over 16 million gold worth of mats and gear on him. That is why his bags and mail are always full. In real life he has an extensive knife and gun collection. He also hoards Dogs and rocks :)
His wife Diane occasionally chimes in on teamspeak to chat with us. She gets a real kick out of him gaming with people from all over the world.
0 Likes
Page 1 of 2