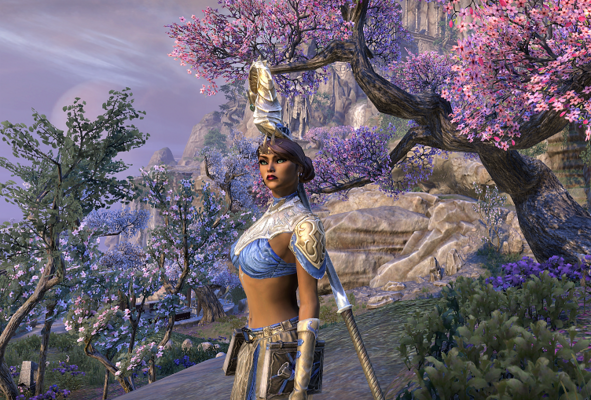 Tell us your Main characters name and any alts you have in Vanquish's ESO division?


What are your normal hours of play and what content do you enjoy most in ESO and with Vanquish?

I usually start my day in game around 9 am EST drinking coffee and trying to wake up, then in the evening I play sometimes till midnight. This usually depends on my work schedule.

The content I enjoy most is Smackdown, Monday Night Madness, Guild events….the easier content lol. Content I can’t mess up on! I’m just now trying to get brave and sign up for Duck and Oakos’ trial events. They are really fun, two great men there for sure. We are very lucky as Guild members to have them!

What is it that draws you to ESO and what about the game are finding you enjoy most?

ESO is a huge stress relief for me and I love meeting new people.

What I enjoy most in the game is probably boring to most other players lol! I put my headset on, find some good music and just go frolicking through the maps picking resources, opening chests and taking screenshots of what I think is beautiful. I can spend hours doing this and usually do: P


Tell us a bit about your past MMO experience if any?

My husband introduced me to mmo’s in 2013 with Rift. OMG I was so lost! I didn’t even know there were games like this! And trying to move my toon, and attack mobs was impossible for me at first. I was running into walls you name it. The BMW you all know has come a LONG way baby lol! Now, saying that…..I could at anytime still run into a wall, fall off a cliff, etc….you never know what I’m going to do!

Next we tried Guild Wars2. I LOVED this game! The characters are so pretty and all the sparkly weapons and armor…yum! What I didn’t like…was once again to get the best armor/weapons you had to do group content. Something I was not used to doing.

Then I tried WoW. Gus has played WoW for years, so how can I go wrong? BMW did not like the cartoony looking characters, but I LOVED the flying mounts, pet battles (yes….I said pet battles!) gathering, and just flying around landing on top of mountains again looking at great scenery and taking more screenshots! We have two very close friends that play most games with us, and we would team up and do some of the harder dungeons, but that was not all the time. We are pretty much the solo pve players me and my husband. We bought Legion and played through that and kind of got bored with WoW, so we decided to try ESO.

When I started ESO Gus tells me….”This is going to be a different combat system than you’re used to.” I’m already cringing….then he lays the WASD thing on me! UGH! How in the heck do you guys move your character and play your skills at the same time??? It took me about 2 months of trying different key bindings to figure out I wanted a 4 button mouse and a way different set up for my skills, etc. No one would probably EVER play the way I do, but it works for this old woman, her trigger finger and my brain lol: P

I instantly fell in LOVE with the scenery and architecture of this game! Sometimes I feel like I’m in Game of Thrones, which is great…… I love that show! Character creation was better than WoW at least! I’m very happy we have a trasmog system now. ESO is the only game I’ve tried higher end-game content in. This is a new experience for me 

When did you join Vanquish and why did you chose Vanquish as your main guild, what drew you to the guild?

June 2017. One day Gus and I were in Glenumbra and decided to take a break. We parked our toons by a rock wall while we were afk. When we got back we had whispers from Meg and Squee. They were going to kill the world boss there and wanted to know if we would like to join? We said yes! So we grouped up, killed that boss and decided to progress into some delves and dungeons. Ended up playing for 3 hours with them, it’s one of the best times I’ve ever had in gaming and I’ll never, ever forget that day. Squee and Meg talked to us about joining Vanquish and us being the solo/pve player’s that we are, we were unsure at first, but then we decided to give it a try.

It was the BEST decision we’ve made and we found a home with the greatest bunch of helpful people, and made some life-long friends to boot! That was June of 2017, so we’ve been with Vanquish for a year and what a FUN year it has been!

What has been your most memorable moment in ESO so far?

I have so many, but here’s three!

The MOST memorable moment for me and for my husband was when the Guild threw us a Wedding in game! When we joined Vanquish in June of 2017, Gus and I were engaged and getting married in October of 2017. Duck and Savina played a HUGE role in planning and organizing an an in-game wedding for us. Such a cherished memory we will have for the rest of our lives! Every detail of a real wedding was thought out by Duck and Savina, it was so touching and beautiful. BMW cried many times during that event. We cannot thank you two enough, Duck and Savina. We still reminisce about that day/memory so many times.

While in a dungeon with Oakos, he told me to jump off a cliff and I get would get an achievement. Dummy me….I know! Fell to my death and he cackles!

Another one is the first time I saw Marteene in game. He was in his Nordic bath towel (dyed PINK) eye makeup on and dancing seductively…..one cannot simply unsee that!


If you had to chose one weapon what would it be? A sword, a bow, a staff or a rabid raccoon tied to a stick?

I’m a staff lady all the way! Mage-like character’s are my favorite to play and definitely try to stay range ha ha!

If you enjoy the crafting side of ESO, what crafts have you spent the most time on?

I love crafting in ESO. I find it’s the easiest format I’ve ever used in any mmo. I have all the crafting lines leveled, but currently I really enjoy learning and crafting the house furnishings!

Finish this sentence: "You round the corner passing by the Officers barracks coming to a heavy wooden door, the sign posted above reads: - Commander Oakos, Leader of Vanquish - Upon opening the door you are surprised to find..."

“Upon opening the door I am surprised to find a band of banekin’s picking through Oakos’ beard finding soggy cheetos and flinging them at a bust of Molag Bal!”

Savina 2y ago
Great interview. I would believe the "WASD" thing! I get it and am still traumatized by it, 4 years later and the hardest thing for me in this game is still quick movement.

The wedding was a wonderful time and I'm glad it is one of your best moments. It was all Duck, I did very little other than show up and throw some flowers.
1 Like

(BMW) Black Magic Woman 2y ago
I hear you Savina! We loved that wedding as much as our real life one! You and Duck are amazing, thoughtful people!
0 Likes

Creakinator 2y ago
I have to agree with the WASD. I drive with my left mouse button, interact with my right mouse button (loot and stuff), 1-6 for skills and buttons on my mouse for map, move right-left-back, mount, etc.
1 Like

Sabretusks 2y ago
YAY BEAMER!!! Glad to have you and Gus with us!
1 Like

(BMW) Black Magic Woman 2y ago
Aww, thank you Sabre! I think you are one of the kindest people I have ever encountered in real life and game. You're a goodie! :))
0 Likes

Khundryl 2y ago
I hate WASD for movement, play with a controller because of that. I loved mouse movement with EQ and then WoW, Wildstar etc. Go go Team CT :)
1 Like

(BMW) Black Magic Woman 2y ago
Aww, great another New Englander! I tried and tried, but could not do that WASD thing lol!
0 Likes

Ogromus 2y ago
That's my wonderful wife, BMW! I'll ask her what she is doing .. she'll reply gathering, housing, changing my outfit, etc. She will always find something fun to do. I love you were choosing to be the member spotlight. You're such a loving, friendly person and fun to play with. Congrats to my wife! :D
1 Like

(BMW) Black Magic Woman 2y ago
Aww, my beautiful husband love you so much! Thank you for the wonderful kind words!
0 Likes

Lenore 2y ago
Wonderful Interview BMW! You and I must have joined very near the same time. I've enjoyed our friendship so much. You are a kind, warm, thoughtful lady who makes everyone feel at ease. A true treasure as a friend.
1 Like

(BMW) Black Magic Woman 2y ago
Aww, Lenore thank you for those kind words! You dear lady are one of the reasons I venture out into group play! I'm very thankful for our friendship also, hugs!
0 Likes

Duck 2y ago
Excellent interview Beemer and very nice shot of your character! Enjoyable read.
1 Like

(BMW) Black Magic Woman 2y ago
I have to tell you again how much that wedding meant to me and Gus Duck! We are very thankful you all thought enough of us as new members to do such a wonderful event. Plus.....you have even gotten me to sign up for some trial group content. Something I never did in past mmo's. :)
0 Likes

Infidelux 2y ago
I love how every time you join in on an event, you're wearing a completely different totally awesome outfit. I try to hit that creativity factor but don't think I quite hit the mark most of the time.
1 Like

(BMW) Black Magic Woman 2y ago
Aww, thank you so much Infi! I have to admit the dressing of my toons is one of my most favorite parts of any mmo I've played! I was so happy when they came out with the transmog system. I love that you are always willing to help and teach people, that's so important! :)
0 Likes

Squeetard 2y ago
Congrats Beemer! Great write up and great person. FYI, finding you and Gus got me and Meg promoted to officers :)
1 Like

(BMW) Black Magic Woman 2y ago
Oh wow, I didn't know that Squee!!! You and Meg are wonderful Officers! I still refer to you as an Officer of Vanquish because for me, and so many other's you will ALWAYS be! You were the first person to call me Beemer :)) Keep being you, and keep being well. Miss you!
0 Likes

Merlin Pendragon 2y ago
Very nice write up!
1 Like

(BMW) Black Magic Woman 2y ago
Thank you Merlin! I always think of myself as a boring member of the Guild, but I'm happy you liked it :)
0 Likes
Page 1