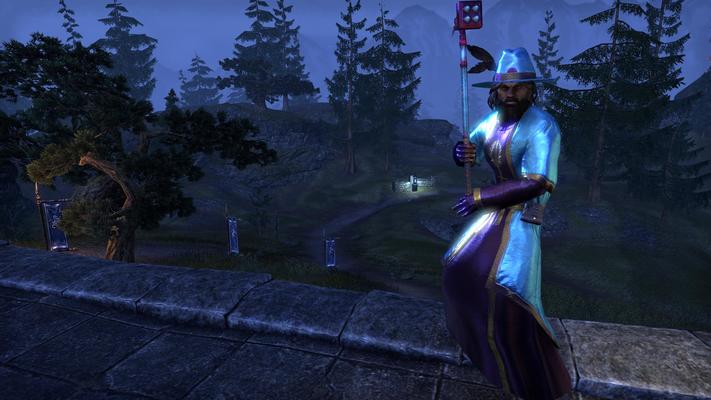 Nuke was chosen for this Member Spotlight because he is a funny guy with a infectious laugh that makes any party just a little bit more fun. When he starts giggling in Discord during FNF I always end up laughing...not always sure what I'm laughing about but it is really funny (hmmm, could it be the peeps?) !!

Anyway, here to tell you a little bit more about Nuke is NUKE.

Please tell us your main character’s name and class and any alts you enjoy playing.

Nuke Stormcrown is my magsorc that I've been using most for PvE lately. Nu'klee-ar is my stamplar for PvP. I have 9 level 50s... I try not to stick to just those two, but those two are probably my mains. I have a habit of trying a new DPS build, and if it doesn't work out, that becomes a PvP charater and I move on to the next one.

Nuke Stormcrown is a magsorc with no pets. I purposely avoid using them. Pets are annoying and lightning is fun. Nu'klee-ar has Binding Javelin. I know many are switching over to DK, but I miss that ranged stun so much when I'm on my DK.

Nuke is an old nickname that stuck. Friends still call me Nuke. When I meet someone new, they say "Nuke? Like the bomb?" All of my character names include some variation of "Nuke", but I try to make the name match the ESO style for that race.

Usually evenings. Cyrodiil can be quite painful at times, but I still like PvP most simply because it's more dynamic. Other human players are tougher to predict than an NPC. FNF is the best event in any video game ever.

Elder Scrolls. I've always liked the series and heard the game could be played solo for the story. I didn't have many expectations beyond that when I first started. This community has kept me playing.

I like video games in general. I've played a lot of games, but I've honestly never been big into MMOs until now. The only other MMO I've played extensively is EVE Online. I played that for about 3 years. An ECM battleship was my favorite to play in a group. I could write an entire post about that game that wouldn't apply to any other MMO though.

I've always liked RPGs and strategy games but always played the solo ones. My first RPGs were Final Fantasy and Dragon Warrior on NES followed by the plethora of fantastic SNES RPGs, which are still among my favorite games of all time: The Soul Blazer trilogy (Illusion of Gaia and Terranigma), the Mana series, Secret of Evermore, Earthbound, Breath of Fire, FF II & III, and even Super Mario RPG. It was about that time I built my first PC and played Arena, Daggerfall, and Morrowind, so I became an Elder Scrolls fan pretty quick. Fallout is one of my favorite series.

My favorite video game character doesn't even come from an RPG though... that would have to be GLaDOS. (https://www.youtube.com/watch?v=Y6ljFaKRTrI)

It looks like I joined about a year and a half ago. Has it really been that long? I think it was really the description of joining a no drama, no pressure, older group of players. I was also told there was free beer.

There's been a few highlights that stand out...

My first trial. Having done almost no group content before other than some PUG dungeons, Oakos convinced me to tank Cloudrest the first weekend I joined the guild. I received a C-minus.
The World Boss Marathon. A handful of us killed all 143 world bosses in one sitting!
The guild hall reconstruction. Seeing everyone come together to rebuild the guild hall was something special.
And finally, the introduction of the FNF Bingo Cards.

Do you enjoy housing in ESO? If so, please tell us a little about your favorite house.

I really like the Colossal Aldmeri Grotto. Who wouldn't like a pirate ship in a cave with a waterfall?

If you enjoy the crafting side of ESO, what crafts have you spent the most time on?

I'm indifferent on the crafting side of things. I've researched all traits. I make whatever gear I need for myself now, but not much beyond that.

I've always liked giant hammers in games like this... the oversized ones that dwarves might carry around. Intimidating, but almost completely impractical. The Cranium Basher Thunder Maul from Diablo II will always have a soft spot in my heart.

I put hot sauce on everything.

Savina, doing normal guild leader stuff. Everyone is sober and wearing pants. Honestly, I don't think there's much else in that door that would surprise me at this point.

Duck 1y ago
Very enjoyable read and some great answers! Thank you Josie for bringing Nuke to the Spotlight. I laughed, a little too loudly, when he mentioned about making dps toons and when they didn't work, they were then Pvp toons. LOL

And the last line was awesome!
0 Likes

Savina 1y ago
Thanks for sharing Nuke! I love these spotlights that give us more insight. Have to say you are for sure one of our Vanquish success stories. Thanks also for helping out with some of that "Normal guild leader" administration stuff! Your help, and kind words are always appreciated.
0 Likes

Sarah (Kamali'i) 1y ago
I love Nuke's giggle too. It's infectious. We miss playing with him in Cyro every night. And that SWEET pimplar!!
0 Likes

Lapuaboy 1y ago
The PimpLar is the best. Actually, Nuke's scrawny old blind Breton is the best! Might need to bring him back out on display for those that missed that dapper gentleman. Nuke is a great guildie and a total hoot; he and Techno always have me smiling. I really enjoy reading these spotlights😀
0 Likes

Nuke 1y ago
Lol, this guy? He's my healer. I figured I'm probably a terrible healer. This way I could pretend it's just RP. I have an excuse when I try to heal the wall. 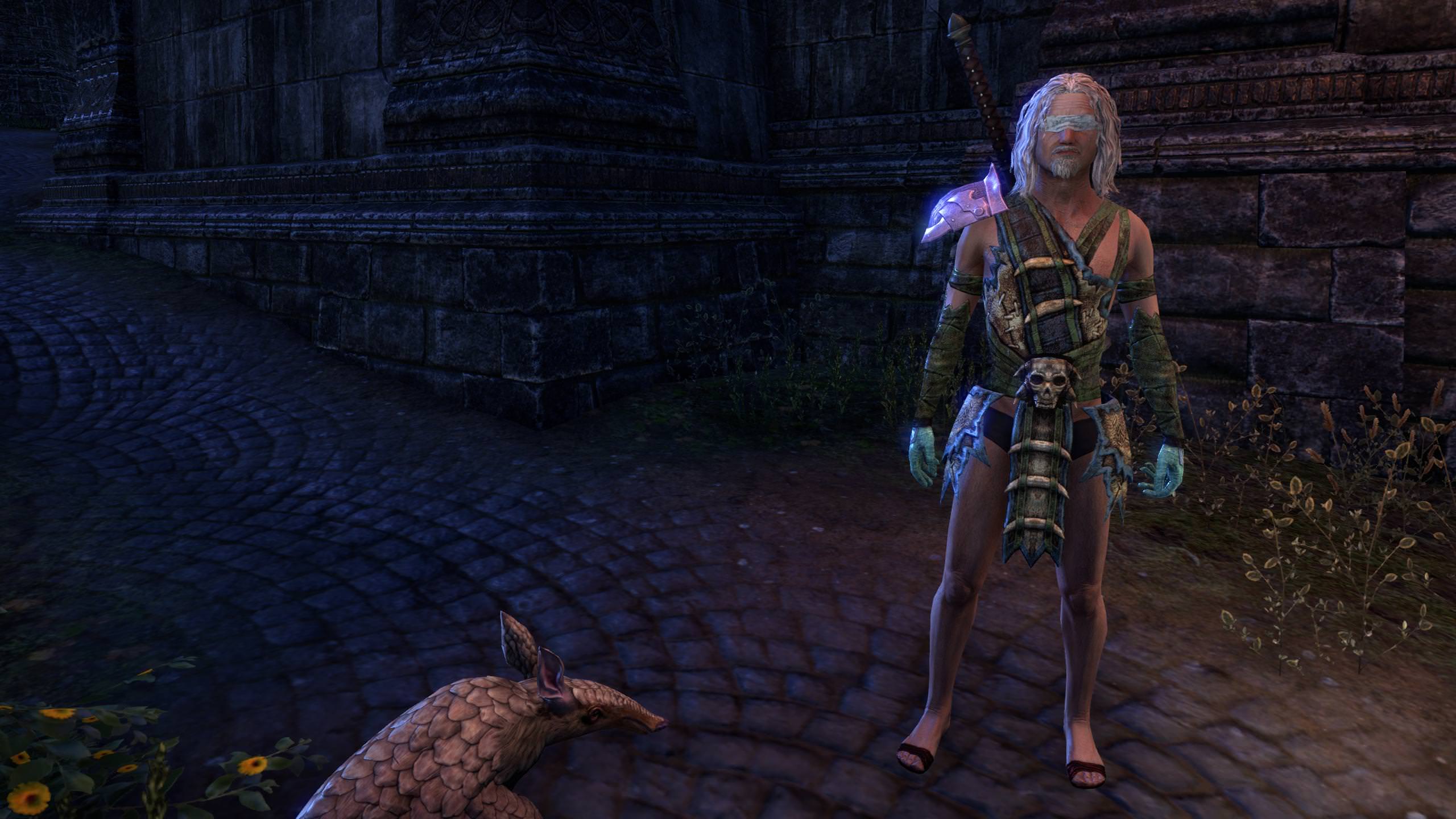 Lapuaboy 1y ago
He's wearing more than the last time I saw him! 😀
0 Likes

Nuke 1y ago
As far as the hot sauce comment, this sticker came in my hot sauce monthly subscription box today! 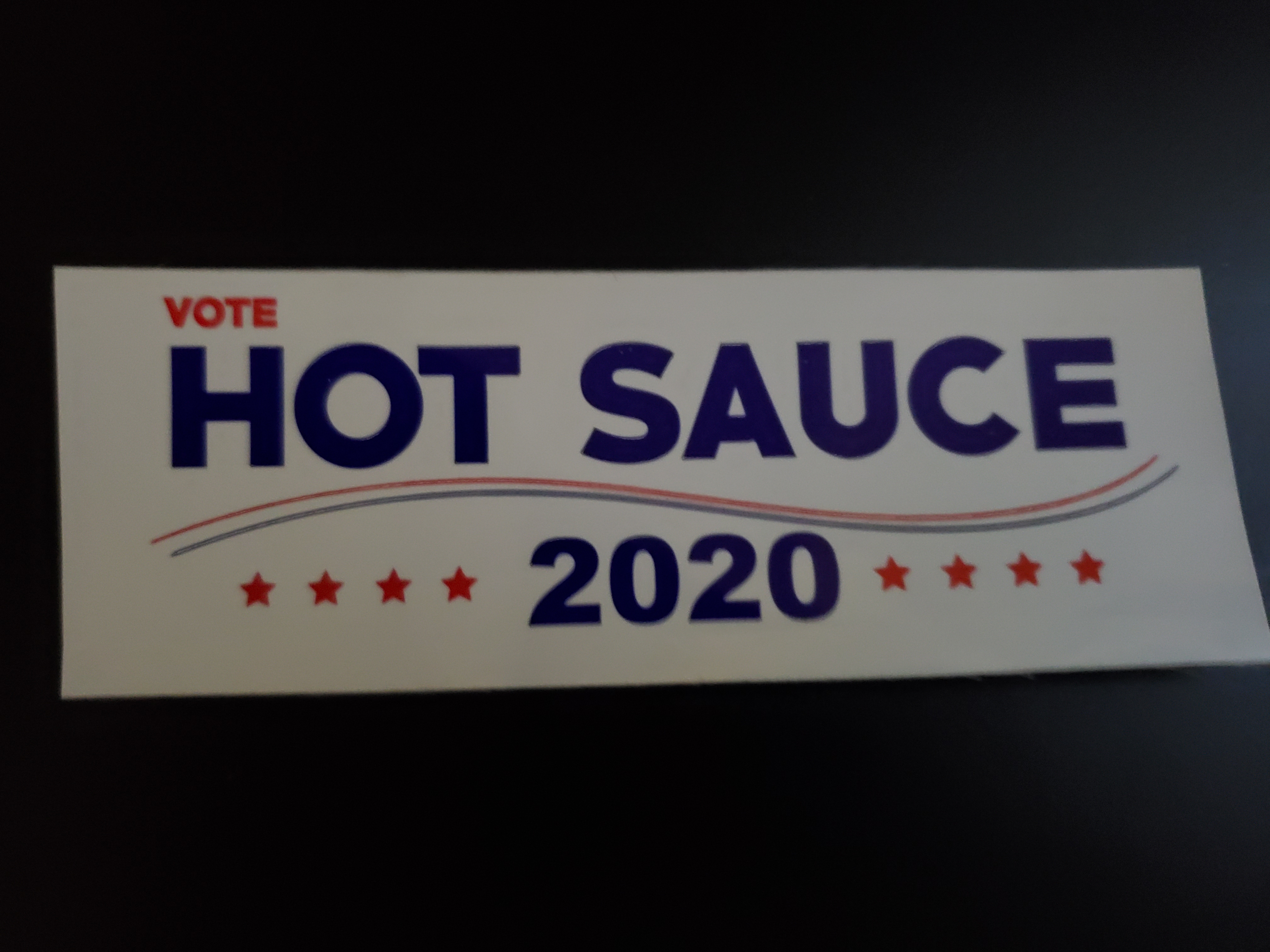 @Tuatha'an (Josien) 1y ago
just the fact that you have a hot sauce monthly subscription box is kind of... hmm... I can't even think of a word for it!!!
1 Like