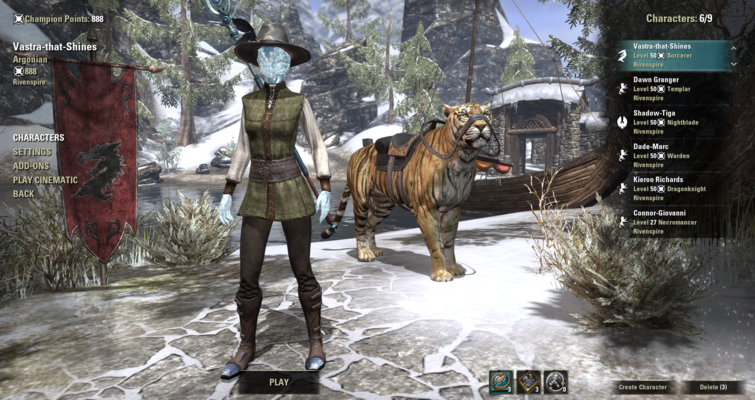 Glitter was chosen for this months member spotlight because he's a very nice guy who is always kind, fun, supportive and willing to help with pretty much whatever people need help with.

Please tell us your main character’s name and class and any alts you enjoy playing regularly.

She was my first char back in beta. I've taken her through all the regular storylines and a few of the DLC storylines. She's my main crafter. She's the one I want to get all the achievements on. I just love playing her.

Vastra-that-Shines is a semi take on Glitter-tiga. I wanted an Argonian name and used the name "Vastra" after a character in Doctor Who.
Dawn Granger is the real name of my fav superheroine of al ltime in comics (Dove of Hawk and Dove).
Shadowtiga is a villain of the inspiration of the tv show I get Glittertiga from: Ultraman Tiga (it's a Japanese show)
Kieron Richards and Dade-Marc are character names of characters I played in LARPS years ago (Kieron was a Tremere and Dade Marcus was a Toreador in the Worlds of Darkness Chronicles)

We all know fashion is the true endgame, so please tell us a little about the outfit your character is wearing.

Vastra is wearing what looks to be very pilgrim like attire to show her voyagerism towards different places. The hat is very "Indiana Jones"ish which is gonna go well with the new archeology game addition coming up that I cant WAIT to play!! And the Crystalfrost skin goes great with the "shines" part of her name. A happy coincidence since it wasn't available in beta.

I normally get up around 6ish on week days (sometimes weekends) and will play till lunchtime and also some nighttime events. I love getting achievements and enjoy everything about the game. Before Vanquish, I never even considered doing Dolmans, public dungeons, dungeons, world bosses, and trials. I was a solo player who really didn't rely on anyone else. The guilds I was part of were just friends I worked with and didn't function as a team so Vanquish opened me up to whole new worlds of play here in ESO.

I have played in a few MMO's over the years but ESO got me into something I swore I'd NEVER do: PVP. While Im not great at it now, I like healing in FNF.

I love rpg games. I got a job at Bethesda on the ESO account and part of the requirements were you had to play the game and make a character from each faction. So when I say "Beta" I mean "the second round of beta invites that went out" we got to figure out bugs, run through walls, go through all the issues each new beta until launch.

I love the fact that, unlike WoW, you are not restricted to only a couple professions.

Hmmm.. I started MMO's playing City of Heroes with a defender-healer named Blue Swan. She was fun. I also played WoW and FF11 but i really hated FF11. I play healer classes and those are so hard to level if you don't have a dependable guild to run with. WoW was a lot of fun but the guild I ran with started being really demanding on my RL time, constantly wanting me to stay in on the weekends so I could run raids with them as my healer. I quit and came back several times (my friends liked to joke "like a crackwhore in need of a fix, you return.") I've been WoW free for about 8 years now. :)

My favorite character ever? Oh man.. thats tough.. but I do love Vastra-that shines. :) and I loved Blue Swan before they nerfed the defender class in (I think) issue 8 of CoH?

I joined Vanquish less than a year ago because one of my RL friends is an officer in the guild and recommended it (Throm). I've loved every minute of it (except for that first FNF I did. I HATED that and it is the only time I almost rage threw my computer against the wall. I had lots of technical issues that night. LOL)

Hrmm.. threeway tie.
1: Lenore teaching me Fang Lair mechanics (which is my FAVORITE Dungeon).
2: Bella teaching us LoM trials on Friday (Also a favorite, shes a great teacher!!)
3: Warden helping set up my gear for Dade-Marc, turning him from my least fav char to play into one of my best.

Do you enjoy housing in ESO? If so, please tell us a little about your favorite house.

I'm not good at it but I'm learning, and yes, I do like it. The Velothi house in Deshann is my favorite house but 2nd favorite is setting up the Grand Psijic Manor.

Do you enjoy the crafting in ESO? what crafts have you spent the most time on?

I LOVELOVELOVE Crafting. I'm trying to get the 50 motifs achievement currently (I have 38). I make it a point to try and get everything crafting on Vastra-that-Shines. :)

I'm a huge fan of Staves. If I can only get motifs for one weapon, it's the staves. :) By the Grace of the Gods, I found a Psijic Order Staves Motif. That's one of the two stave Vastra carries around. The other is the Huntsman one.

Nothing comes to mind. I'm a pretty open book. I'm a gay disabled married guy who lives in Austin, Tx and loves playing ESO. If I can help, I will. :)

"Duck, laying across her desk in a provocative pose, candles lit all around the room in some kind of seductive ambiance. His eyes are closed, taking in the moment and he speaks in a low soft baritone murmur: "I've been waiting for you.." as he opens his eyes and immediately jumps up in some kind of scooby doo scramble to duck behind the desk. "GLITTER!! I thought you were-!!"
"And me without my camera!!" Glitter laughs as he closes the door behind him.

Nice write up and thanks for the great responses Glitter! Enjoyable read.
1 Like

Aireal 1y ago
Very enjoyable read! Love the humor!
1 Like

Last Tono 1y ago
Congrats Glitter. Come see me if you want to finish decorating that house or get serious at the villa. 😎
1 Like

Savina 1y ago
Thank you for sharing Glitter! I love reading these spot lights and learning more about our members. Enjoyable read and great stories.
1 Like

Santaniko (@Santaniko) 1y ago
Thanks for a great read, Glitter! I'm a fan of Fang Lair too...
1 Like

Lenore 1y ago
Nice write up Glitter! You've been a real asset on the day shift! I appreciate your frequent help with getting things done for folks leveling and looking for gear!
You ROCK!!!!!!!!!!
2 Likes

(BMW) Black Magic Woman 1y ago
How great to have you in Vanquish! Loved your interview, very interesting life and in game life! Thanks for being such a positive influence to the family!
1 Like

Throm the First 1y ago
Love it bud! So happy you have found a home in ESO! Though I am not used to seeing the "married" aspect about you lol. Glad to see you thriving!
0 Likes
Page 1