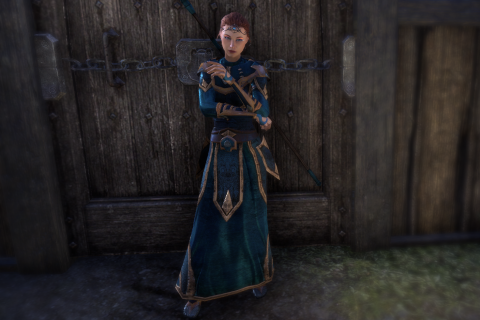 This edition brings us the story of a member who needs no introduction. Taeve! (or for Duck, it's Teave) She is always friendly, easy going, and ready and willing to help, happily filling either dps or healer roles and to top it off she is a Master Rezzer!!

Is there anything specific about your favorite character that you particularly enjoy?
Whenever I start playing a new MMO I make several different characters and start leveling them at the same time. Eventually the ones that "feel right" become my mains. It seems I am partial to healing though.

Does your @ name and/or character names have any special meaning? Why did you choose them?
Most of my character names are names I have used before in other games, and I reused them here to be recognized by fellow gamers who have shared games. Many were just made up and I liked the sound of them. I tend to use one syllable, short, easily pronounced (well...at least for most of us) names mostly because I make lots of alts and am not the best typist so I wanted to make it easy to send things to my alts in the previous games I played. @Thimblewearer came about because I am a professional seamstress by trade. ( and no, I don't use thimbles)

We all know fashion is the true endgame, so please tell us a little about the outfit your character is wearing.
Cayz's outfit was the first outfit I put together at the outfit station. (the outfit station should come with a warning about how addicting it can be!) When I put an outfit together I just dabble till I find something I like. I tend to assign color palates to each of my characters though just so I can recognize which ones I am playing when I get a senior moment or such.

What are your normal hours of play and what content do you enjoy most in ESO and with Vanquish?
I usually on between 7:00-9:00 am central time to do dailies and such and 7:00-10:00 pm central for the real play. Frequently I will be on during the days if work is slow or I can schedule a time. Many times during the day when I am on, I am semi afk because of work. I really enjoy the trials, dungeons and Friday Night Fights events. I wish there was more time so I could join in more.

What is it that drew you to ESO and what about the game do you enjoy the most?
Our guild in RIFT had become discouraged with the game, but many of us did not want to leave our friendships, and a few who played ESO persuaded us to try ESO. I guess the rest is history. What I like most? How can you choose any one thing over another? I think each activity in the game adds to the whole of it whether it be crafting, questing, exploration, raiding, or pvp. I was never much of a pvp'er but Dan has made Friday Night Fights something to look forward to

Tell us a bit about your past MMO experience including who and what was your favorite character ever.
My first and still favorite MMO was DAoC. My main was a friar and I have yet to find a class in any other MMO quite like it. I played on a role playing server and was in one of the top rated role playing guilds. I enjoyed role playing but been there/done that, got the t-shirt. I dabbled in EQ2, then moved to WoW for 5 years where my main was a shaman healer. I started playing RiFT when it came out and then moved here about 2 years ago.

When did you join Vanquish and why did you choose Vanquish, what drew you to the guild?
I joined Vanquish in Dec 2018. My friends and I that moved here from RiFT wanted to do more group oriented activities but none of us wanted to recruit and organize another guild so I took the initiative to find a guild that best fit what we had formed previously. After lots of research Vanquish was the best match. Thank you for letting me be part of this wonderful guild!

What has been your most memorable moment in Vanquish so far?
There are many but nothing can beat how when we lost our first guild hall, we teamed together and were able to rebuild it bigger and better is just under 4 days. That was an awesome experience.

Do you enjoy housing in ESO? If so, please tell us a little about your favorite house.
The housing here is wonderful and I admire the creations people have made, but I don't do housing. I have one house that I have my storage chests in, a couple of training dummies and a transmute station and that is about all.

Do you enjoy the crafting in ESO? what crafts have you spent the most time on?
Crafting has always been my passion is every MMO I have played and here is no different. I have 12 different characters and each of them is a master crafter. I enjoy all the crafts but Alchemy is probably the one I spend the most time on because they are consumables and I need to support my habit.

If you had to choose one weapon what would it be? A sword, a bow, a staff, a rabid raccoon tied to a stick, or something...more creative?
hmm...could I have a magical pencil/paintbrush? where I could just draw the weapon I want at the spur of the moment? maybe an anvil to drop on this mob's head? a wall they can't pass? A hole they fall down in? otherwise I would like to see quarterstaves again like they had in DAoC.

Is there anything else you would like to tell us about yourself?
I live is South Dakota, have a home business as a professional tailor/seamstress, have 2 grown daughters and a not-so-grown up husband. (do men ever grow up?) Besides gaming and sewing, I like to read, cook, and dabble in art.

Finish this sentence: "You round the corner passing by the Officers barracks and come upon a heavy wooden door, the sign posted above reads “Savina, Guild Leader of Vanquish”, upon opening the door you are surprised to find..."
Sav standing in the corner with her arms crossed tapping her foot glaring at Duck remodeling her office. On second thought, why should I be surprised?

Savina 289d ago
Thanks for sharing Taeve, I love these member spotlights!! It is always a joy to read and get a bit of insight into our members. Your creativity shows in your choice of weapon there. So glad that you joined the guild and not only found a home but continue to help us make it a home for others!
0 Likes

Santaniko (@Santaniko) 288d ago
The "anvil on the head" bit made me think of Wile E. Coyote (super genius). Thanks for sharing, Taeve!

I really love these spotlights!

Keepers of the website: may I suggest creating some kind of an archival thread of just these member spotlights? They deserve their own, imo.
1 Like

Savina 288d ago
It is actually something we've talked about once or twice. I'll see what we can do about making it happen sometime in the near future.
0 Likes

Duck 287d ago
Well done and thank you so much for sharing! And I'm sure I'm not the only one who says "Tave". LOL. Or maybe I am? I love these things, the posts, the insights. The guild hall was amazing! Thanks again!
0 Likes

Throm the First 267d ago
Late to the party, but wonderful read, thanks for sharing!
And no, we men do not ever grow up :)
0 Likes

Lenore 252d ago
Awesome to get to know more about you this way! I really enjoy playing with you! Member spotlights are GREAT!
0 Likes
Page 1