WE DID IT! WBM3 complete! 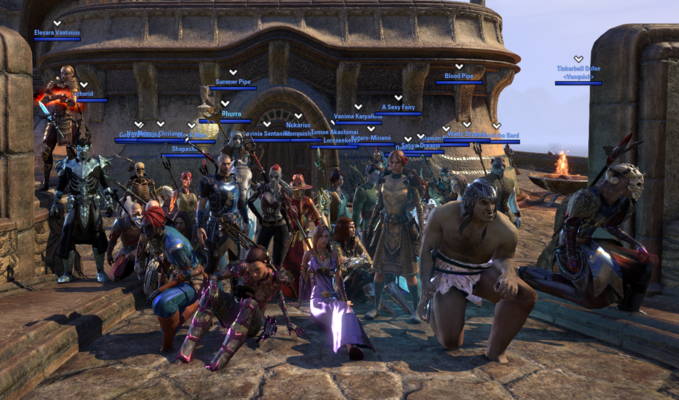 Last Saturday, the 5th of September, marked the 3rd World Boss Marathon with the objective of destroying all 151 (159 actual kills) World Bosses throughout the land of Tamriel.

At 11am EST, we met in the Glenumbra of Daggerfall City. Jumping over the wall down to our first target started a timer that would last to the final show in Vvrandenfell. An average of 37 Vanquish members for each of the 29 zones, up 16 from last year, we had a high point of 47 in the two groups and at the lowest, 24. Over 70 Vanquish members took part in this event.

18 HOURS and 18 MINUTES later…. With all 159 quests done, all coffers in every DLC zone, we celebrated in the city of Vvrandenfell as we took down the very last World Boss, the Nix Hound.

We wanted to thank all Vanquish members that made this event run so well. With everyone sticking with crown, not having pets of any kind up, keeping with Light and Heavy attacks, exercising patience, and understanding throughout the entire day. We made a path, a destination, but it was all of you that exercised it beautifully. So, thank you Vanquish, from us.

We also wanted to give a shout out to Prize donors. 4,650,000 in gold was donated by Infidelux, Lenore, Savina, and Guild store sales tax. Crown Prizes were provided by Duck and Savina.

After each two zones, two drawing were held for prizes in which items such as 50K in gold, Crown costumes, Crown mount of choice, Appearance change token, variety of recipes, Crown Inventory Pet, and Crown Crates were passed out.
To those listed above whom completed the full 18 hours and 18 minutes, each of them received 250K in gold (3.5 million total) and SummerLexus winning the Stonefire Scamp Runebox.

Overall, the event was a blast and we cannot wait to see what holds for next year. For some, this was their first time. For others, like Santana, this was his anniversary date. We laughed, we drank, we ate what we could and stretched when we were able. We learned about Glitters thoughts AND got to practice things that Rose taught us in between breaks.

Thank you ALL for such a wonderful, memorable time!

Below are some comments that were made before this news thread was posted:

“Even though I did not last the whole duration, it was a great time. Thanks to Duck and Savina for organizing and hosting this and to Infi, Lenore, and Sav and anyone else who contributed the prizes and time to make this happen.” – Thimblewearer

“This one -wanted- to come back, but his sewer line engaged in pvp and won. This round. :(” - Karthrag

“The WB Marathon was so much fun.. sorry I flaked out before the end but it appears you guys finished all of them!!! Gratz to those who did all 151! :partying_face: My hat's off to you!” – Josien

“Duck and Savina , the World Boss Marathon was a fantastic day! You both did an amazing job, and the effort you put into the day is really appreciated. Thank you both very much!” --BarleyHop

Savina 49d ago
This is the exactly what I said last year and it still is the honest truth!!

“The truth is we really didn’t do that much…. started auto invite and followed a laid-out plan on where to go next. ALL of you that participated in this event are the ones that made it a success. Everyone involved did their part to ensure everyone got credit for each boss. All involved stayed with the group and exercised patience and understanding throughout the day for both Duck and I, as well as their fellow guildmates. It really was ALL OF YOU that made this Event so much fun!”

Our members are the people that put the "SPECIAL" in "Special Event"!
1 Like

broken-sword 49d ago
That looks like a classy group of individuals!
0 Likes

Salditerre 49d ago
This event was awesome, loads of laughs and good fellowship with everyone. I wish I had the stamina to have been apart of more of the event.

Grats to everyone who attended.
0 Likes

Lapuaboy 49d ago
Just an awesome time! I was only with you guys for 6 hours, but it was a quality 6 hours😍 I tried the mirror thing; just not for me😋 What a good group of people!
0 Likes

Throm the First 45d ago
Congrats everyone!
0 Likes

@Evenfall-1 (Pipe) 33d ago
Endless fun and laughs from the start all the way to the end. May the coffee gods allow my to run the entire event again next year.