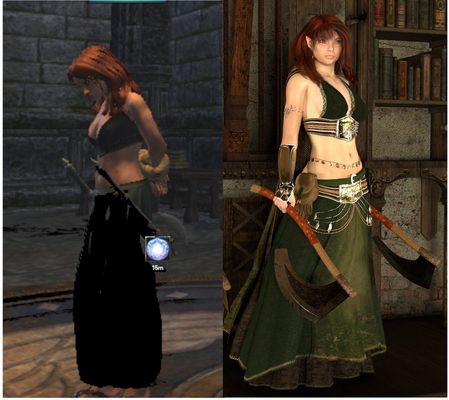 This edition of Member Spotlight is all about Rose! A kind hearted generous and active member of Vanquish. If you haven't read Rose's short stories you can find them here "The Sword", "The Bird Queen", and a Poem The Necromancer's Song for Stuga and you'll be glad you did!

Please tell us your main character’s name and class and any alts you enjoy playing regularly.
My first, main, oldest, favorite character is Fahlilii Yol Briinah, a Bosmer Nightblade. I created her back in 2015 before I had a clue about races, classes, alliances. Points or anything except that I enjoyed Skyrim. Fahlilii ran solo for 3 years and it took until July 2018 before she reached 50. After joining Vanquish she found her siblings-from-another-parent scattered throughout the races, classes, and alliances of Tamriel. I currently enjoy playing Nina Yol Briinah (Dunmer Sorcerer) and Eirrún (Altmer Templar) both AD. Brit (Breton Sorcerer) and Jinny (Khajiit Warden) are my go-to DC characters.

Is there anything specific about your favorite character that you particularly enjoy?
Fahlilii is my jack-of-all-trades and is more guts than glory. She is fiercely loyal, utterly amoral, and wildly adventurous. I like Eirrún’s class so far. Nina is the most versatile for me to play at the moment.

Does your @ name and/or character names have any special meaning? Why did you choose them?
I’ve been using some variation of Rose Mackie since the days of the abacus. The ESO family name “Yol Briinah” is Thuum for “Fire Sister” and ties into the back story for my characters. I use Thruum for several characters: Fahlilii = “little elf”, Brit = “beautiful”; Monah = “mother”. Others were chosen randomly but with thought: my Khajiit is Jinny Anydots from Cats; Utsidhi is Algonquin for “mankiller” and is the surname of a Native American activist I admire; Eirrún is a valkyrie healer in Norse mythology and rún means “secret”; Nina came from a dunmer name list and I wasn’t going to keep her; Xiao is intended to grow into an Argonian templar healer one day and her name is chinese for “little sister”; Tomoe Akishimai is Japanese for Bright Sister Blessing (Tomoe Gozen was a 12th century female samurai); Brokken Yol Zenmah (Thuum “Fire Brother) is my only male character, a necromancer, and his name describes him.

We all know fashion is the true endgame, so please tell us a little about the outfit your character is wearing.
Oh dear. My characters dress with two things in mind - where are they going and what are they riding. They try to match their mount and the environment they’re in. They do have personal colors and taste preferences. They all prefer garb best suited to the environment and the job at hand. Fahlilii dresses in leathers, mostly green with brown or old gold. Brit bleeds DC blue and grey. Nina prefers an ashen palette. Monah wears grey and dried blood red. Jinny has no dots and prefers black and gold. Xiao is pretty in pink (her original name). Eirrún matches her Dawnwood Indrik.

What are your normal hours of play and what content do you enjoy most in ESO and with Vanquish?
I work full time so usually play a few hours in the evening every weekday. On the weekends I am on and off all day. Counting down to retirement in December 2021. I am a solo player and more focused on story and questing. I enjoy the camaraderie of the group events FNF, SMS, and MNM and lurking about in Discord. I’m not good enough for veteran content and not interested in it at all. I don’t believe there is an “end game” in ESO.

What is it that drew you to ESO and what about the game do you enjoy the most?
I played Skyrim for a good while. My son-in-law suggested I might like a Skyrim-type MMO and gave me ESO. The story is the reason ESO attracted me and held me. I role-play my characters for the most part so their story is important to me. Each one of my main characters has played or is playing through their Alliance main quest and all of the side quests. Except for Nina, who drew the short straw and is playing the EP storyline.

Tell us a bit about your past MMO experience including who and what was your favorite character ever.
My first MMO was Tabula Rasa in 2007 and I loved how it combined a compelling storyline with solo and cooperative play. I hated WoW. Became a community moderator for Firefall (again a great story with good combat). Played Defiance until the TV show was cancelled and they just quit doing any story. Second Life isn’t an MMO but it is a great online community and I’ve been active there since 2005. Many of my SL friends are in ESO.

When did you join Vanquish and why did you choose Vanquish, what drew you to the guild?
I have forgotten who it was, but I’d like to thank the lady who ran a dungeon with me while I was playing solo in October 2018. She told me that Vanquish was a different kind of guild ~ welcoming to players of all ages and levels, extremely friendly and helpful and very active. I gave it a try and she was right! There’s a level of maturity and kindness in this group rarely seen in online communities.

What has been your most memorable moment in Vanquish so far?
Completing the World Boss Marathons

Do you enjoy housing in ESO? If so, please tell us a little about your favorite house.
I like the idea of housing. The interface is difficult for me to use. The housings are nice, but I’d like something brighter, airier and it just hasn’t been available yet. For instance, a true tree house in a lovely forest glade with access to water and a meadow. Currently I’m working on the Hall of the Lunar Champion and I like the Lion’s Cradle the best.

Do you enjoy the crafting in ESO? what crafts have you spent the most time on?
After wasting much time and effort trying to level everyone on everything, Fahlilii threw up her hands and said to the others “Back away from the crafting stations! I’ll handle this!” She does the writs (sometimes the others pitch in), all the maps and surveys, and the antiquities. The others leveled Alchemy so they could max medicinal and let Fahlilii make their armor and such.

If you had to choose one weapon what would it be? A sword, a bow, a staff, a rabid raccoon tied to a stick, or something...more creative?
Bow ~ hands down ~ a bow. And a knife. Two knives.

Is there anything else you would like to tell us about yourself?
I have a weird sense of humor. I’m shy. Quiet. Until I’ve loosened up a bit and feel comfortable. Some might consider me a bit standoffish and thin skinned. But, a kinda like Fahlilii, I am fiercely loyal, overly polite, and mildly adventurous.

Finish this sentence: "You round the corner passing by the Officers barracks and come upon a heavy wooden door, the sign posted above reads “Savina, Guild Leader of Vanquish”, upon opening the door you are surprised to find..."
Savina, reclined on a comfy sofa, reading a lorebook, munching on sweetrolls, and drinking Honningbrew Mead. She gazes at me over the rim of the book, raises an eyebrow, and says “This better be good.”

Savina 218d ago
Wonderful look into Rose with this Member Spot Light!!! Thank you so much Rose for taking the time to share with us and letting us get to know you a bit better. I don't think I've ever considered you to be "standoffish and thin skinned". BUT....I have always known you to be "kind, generous, loyal, polite, adventurous, and funny"

What I don't understand is why you didn't share a screen shot of your male orc's backside with us!!
3 Likes

@Helkerm 218d ago
Thanks for sharing with us Rose! Also, it's so cool that you share your stories and poems with us. I just read "The Sword" and look forward to reading the rest of your collection.
1 Like

Santaniko (@Santaniko) 217d ago
What a great read, Rose - thank you very much! It was a pleasure doing the WBM with you this year - you kept us in stitches!
1 Like

Hemlock 217d ago
Girl, you made me laugh so hard when you were talking about your orc's butt in FNF. Great interview, thank you for sharing!
1 Like

Lapuaboy 217d ago
Great stuff! I don't find your sense of humor weird at all😀 Had a lot of laughs with you during WBM3😍
1 Like

Lenore 216d ago
It's awesome to stand still long enough to get to know you better Rose! You're a wonderful writer and story teller. I'm so happy that you're part of our family.
1 Like

Duck 215d ago
Incredible! And the detail she goes through with her characters is really, really neat. Thank you so much Rose for sharing! And for those of you whom haven't read her stories here on our forums, please take a minute or two. They are well done!
0 Likes

A Sassy Fairy 214d ago
You are awesome Rose. You are always making me laugh.Thanks for sharing this with us. I haven't read your stories yet but, I look forward to reading them.
0 Likes

Creakinator 208d ago
Nice to find out more about you, Rose.
0 Likes

TricksterToons 192d ago
I agree with all of the above! Big hugs Rose! Thanks for telling me about this guild. It's been a great gift!
0 Likes
Page 1