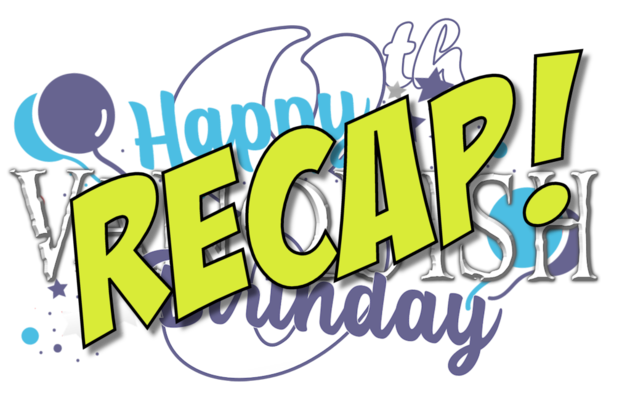 Last Saturday Vanquish celebrated 8 years as a guild here in ESO. Formed Mar.30, 2014 we are one of the oldest guilds, dating pre-launch, and it could not have happened if it wasn’t for the family that makes Vanquish what it is.

As in years past, we use the Birthday Celebration to bring back old events and combine them with some of our more popular. And of course, what kind of birthday party would it be without presents? Starting the day with Saturday Morning Smackdown, we kicked some world boss booty across Craglorn and Cold Harbour. Following, our own very Mr. Cy took the groups to do Monday Night Madness which is World Bosses in a DLC zone. This time, Wrothgar. Between SMS and MNM, Savina passed out about 1.6 million in gold, a Timecrow Wanderer costume (also worth about a mil), all kinds of furniture, and bewitching sugar skulls.

Staring at 3:30pm EST, an old Vanquish tradition of Lawn Darts kicked off. Heading to three zones; Wrothgar, Stormhaven, and then Stonefalls… Savina would leap off the highest ledges and plunge to her death. Since we “always” follow our guild leader, one by one we also took the gray streak down. In the first two zones; Davedek, Cy, Teave, Hex, Karthrag, and AstLuminious were the closest to Sav’s corpse resulting in 80K in gold each. At our final destination, the prizes were on the line. In Stonefalls there is a mountain range with some seriously high peaks. Seeing a corpse at the bottom is nearly impossible so players must resort to landing near “crown”. For the final showdown Tavistock came in 3rd place with 4 Crown Crates to take home. Freepineland, coming in 2nd, grabbed 8 Crown Crates. The winner, AstLuminious with a huge 15 Crown Crate package!

Then there was Vanquish Dome! Imagine a group of Vanquish peeps, butt-naked except the Barbaric Helm they were given and told to fight to the death! I mean it’s family, isn’t it? In a double elimination match, people were paired randomly and then broken into brackets. Everyone is given a random weapon decided by a roll of die. Permitted to use class skills, potions, ulitmates, and/or weapons abilities they have five minutes to destroy their brother/sister. =) After 1.5 hours of a blood soaked field, 4 contenders were left with just one loss each, and four wins.

The battle for 3rd and 4th was Davedek vs Teave. It’s actually Taeve, but… it’s my writeup. Haha. Lasting over 2 minutes, Teave got the upper hand to finally put an end to Davedek’s streak. Davedek would walk away with 300K in gold, 5 perfect roe, and a Transmute Station. Teave/Taeve grabbed 500K in gold, 5 perfect roe and the Stitchedwell Stick Guar from the Crown Store.

The match to earn the title, “Vanquish Dome Champion” would go between the two gladiators of Nuke, reigning champion of 2021, and Blachstahr. A match that was almost 3 minutes long was full of excitement and cheers. Cheer for the underdog or root for Mr. Shiney? I know I rooted for the underdog (sorry Nuke, lol). Alas, despite the cheers, Nuke put the final blow into Blachstahr to hold onto his title carrying it forth till 2023. Despite the loss, Blachstahr took winnings of 1 million in gold, 10 Pefect Roe, the Stitchedwell Stick Guar and the Runebox Timecrow costume. Nuke, proudly displaying his belt, grabbed the huge prize of 60 Crown Crates!

With that event coming to an end, we all limped back to Daggerfall for the Vanquish Roll Call put on by Savina. Notes will be added to the web news later. But of great import, Teave/Taeve/Mrs.T was officially announced as an Officer of Vanquish! WOOT!

If you paid attention at Roll Call, you would have noticed one in particular, dressed up in a wedding dress and wearing a porcelain mask. She, or shall we say Shell, was the Run-Away-Bride for the next event! The Run-Away-Bride was running away from the Chapel! How rude! Right? It was our job to find her and bring her back to fulfill her destiny. Somewhere in Daggerfall, the Run-Away-Bride would hide and once found three times, she went off and hid again. Each time she was found, points were given to the first person who did an open trade with her. The first to win 20 points, or the most within the time limit, would win this Bride and drag her by her dress, or hair, or mask, or with a club… back to the Daggerfall Chapel to say their vows. There was a stick in the wheel though as someone, not sure who it was, was also dressed in a wedding dress to throw off the Vanquish members. Right Throm and Tavi? LOL When time came, we had a Groom, a Bridesmaid, and a Groomsman. The Bridesmaid was Teave, after supporting the bride and getting her there, won 4 Crown Crates and 350K gold. The Groomsman, after convincing the Groom to go through with it, took 250K in gold and 4 Crown Crates. Which left poor Foon (PaleAlgae) to pledge his heart and soul to the woman/thing/beast that hid under the Wedding Dress. After the vows were given, Shell undressed in front of all swinging her big-ass booty all around and pursing her wrinkly lips to land one on Foon. We don’t know what happened afterwards. Foon wasn’t around for Trials and Shell was anxious to find him. Anyhoot, Foon was given a Staple House, fully furnished, of his choice and any Bedroom Set from the Crown Store. Plus, 500K in gold to by his new bride a well needed, lift.

It's Friday Night Fights, Saturday edition in Cyrodiil! The greatest show on earth led by Dan! Our FNF event is always a filled with laughter, drinks, and naked butt riding as pants are not permitted. Destroying keeps, raking in AP, and making little Nords cry. To add to the fun, a new BINGO card was created containing 114 dan’isms. Only two bingos were awarded which went to Smithy and Astluminious who each received 500K in gold. But the highlight wasn’t the bingo. It wasn’t the jokes (usually those are pretty funny), wasn’t Dan, or Scotchy, or Reeh. It was the destruction, of the freaking AD ball group, when we smashed their stupid elf faces to end the night! A fight that was roughly 25 minutes long that ended with them losing Emp! Now that’s how you do it!

And lastly, for those that are still able to attend as it was a very long day, we had a couple groups go into Rockgrove. After the final boss was defeated, we threw down a Birthday Cake, and passed out.

We gave over 12.5 million in gold, a huge assortment of prizes throughout the day, and loads of Crown Store exclusives. Happy Birthday Vanquish!

A Sassy Fairy 37d ago
It was an awesome event. I had a blast. For everyone that missed the Run-Away-Bride event it was fun to do. My toon was very scary looking at least I got one screenshot of here before I got dress in my wedding dress. Foon abandoned hid bride doing FNF. Now I guess it's time to find a new hubby with a new very sexy toon. Thanks Sav and Duck for making this event so much fun. I love everyone in the guild.
0 Likes

Jordi Jasek 37d ago
Thanks to everyone who organized this brilliant event. Time is a very precious resource(even more valuable than gold) and a lot of it went into this to give everyone a fun day with Vanquish through various events and prizes. You're all very much appreciated. 😘 Looking forward to the next event!
1 Like

Jordi Jasek 37d ago
PS. You haven't really PVP'ed till you've PVP'ed with us, naked and drunk. FNF... Friday Night Fights....Just saying....
1 Like

@Thimblewearer 37d ago
Thanks to Duck and Sav for organizing and hosting this event, to Infi. Cy, Dan and Shell for making events possible, for those contributing prizes and for all who participated to make it such a great day
1 Like

Karthrag Inak 36d ago
What a great event - very well organized. So much fun. Khajiit was sad to miss latter shenanigans after lawn darts.
0 Likes