Duck: Glad you did! Sav has a recap of roll call on the news page. Glad you, and about 70 others. We’re able to attend
Nimthriella: Hi VNQ! Loved my first roll call and lawn darts! Looking forward to more fun! \o/
@DeSyreni: WB BMW! <3
TricksterToons: Yay! WB BMW!
Savina: Of Course BMW!!
(BMW) Black Magic Woman: Hi all! Could I get an invite back to the guild? Gus and I are returning to ESO :)
Savina: ROLL CALL has been moved to OCT 16TH https://vanquishguild.com/events/964426?event_instance_id=16503352
Duck: It's up Trickster =)
TricksterToons: Anybody else desperately refreshing the trials page? LOL!
Savina: ROLL CALL Oct. 2nd folks!!! https://vanquishguild.com/events/964426?event_instance_id=16497551
Savina: Throm!! Nan took the FnF reigns tonight!! The Sewers just like the old days! Let us know when you are ready for a re-invite!
Throm the First: Slay lots of reds and yellows for me Vanquish!
Lenore: Thank you Dan for all you do!
Savina: Happy Friday folk! Hope to see you all this evening at FnF!
Savina: Welcome to all of our NEW and RETURNING members this week!
Savina: Thanks to all of you that came out for the 4th Annual World Boss marathon yesterday! We'll get a recap on the event up soon.
Duck: WORLD BOSS MARATHON 4.. starting in 50 minutes!
Duck: It’s Friday and at work with pants on. WTH! We really need a casual dress Friday. Show them that vanquish attire!
Duck: New Companion Guide posted under Guides.
@DeSyreni: TGIF!
You do not have permission to shout
Reactivate
▸ Soidog 81d
Got any room for someone coming back to the game?
▸ @DeSyreni 88d
Member Spotlights
▸ Savina 1y
Roll Call & other Vanquish meetings
▸ Savina 1y
Vanquish Special Events
▸ Savina 1y

The Companion system was introduced with the Blackwood Chapter in 2021. Companions are non-player characters who can aid you on your adventures throughout Tamriel. Once called to your side, these stalwart allies will assist you in combat.

Fighting alongside your Companion will improve their effectiveness and taking actions they approve of will build rapport. As you earn their trust and strengthen your bonds of fellowship, your Companion may share personal quests with you. You may also give them Companion-specific gear and customize them in a wide variety of ways, including setting their abilities, mounts, costumes, outfits, and more.

Your companion's level and combat selections carry account wide. Quest completion, rapport, costume, and mount overrides are determined separately for each player character. Companions are available to participate in most of the over-world content including assist in questing, defeating group bosses, completing dungeons, exploring delves, and more. However, companions cannot participate in PvP (Cyrodiil, Imperial City, or Battlegrounds), in Arenas (Maelstrom and Vateshran Hollow), and will be dismissed in player homes.

“The goal of the Companions system is to provide you with unique adventuring allies to explore the world with who will grow under your care and provide customizable combat support. By developing your Companion to be the perfect complement to your own playstyle, they’ll be able to help you tackle challenges that may have been just out of reach before and provide assistance when another player is not available to join you."

"Companions have abilities to fulfill all combat roles (damage, healing, tanking, and hybridization) in many common gameplay situations. However, they are not intended to replace or be as powerful as other players. If you prefer to tank, you may find a damage or healing-centric Companion to be an invaluable ally, whereas if you’re more focused on damage, you may benefit from a Companion configured as a tank to draw some attention away from you,” Philip Draven, ESO’s Lead Systems Designer.

In this Guide, we are going to cover:

In population-limited instances such as dungeons, group arenas (Dragonstar Arena, Blackrose Prison), and trials, each companion present counts towards the population cap as if they are player. Players will always take priority and companions will be auto dismissed as players zone in.

If the relationship between the character and their companion deteriorates into a very low rapport state, the companion may voluntarily unsummon themselves and be unavailable to the associated character for a time.

Companions will be dismissed if summoning an Assistant (Banker, Merchant, Fence) as you can only have one active at any given time.

Companion visibility may also be briefly suppressed in some situations where they are unable to navigate to your character, such as while swimming.

You cannot romance your companion. Just thought we needed to add that in here =).

Companions can respond to a wide array of situations while adventuring with you, both in and out of combat. While they will always respond to the same critical triggers, you can adjust the frequency your companion will vocally respond by opening the [Settings] Menu, select [Gameplay], and adjust the [Companion Reactions] to "Infrequent", "Normal", or "Frequent".

To engage with your companion simply initiate dialogue by clicking 'E' while facing them. You are presented with 2 options of dialogue; "Let's talk about our partnership" and "Companion Menu".

Let's talk about partnership: Choosing "How do you feel about our friendship" gives you a summary of your relationship with your Companion. "Tell me something about yourself" gives you hints on what your Companion likes, and dislikes, that may affect their Rapport.

Companion Menu: This menu provides you with detailed information regarding status of your companion, as well as tools for adjusting the companion's combat behaviors and visual customization. From the Overview, you can see the Combat Level, the Outfit Style they are wearing (default or created outfit from an outfit station), their slotted skills, and Rapport. Under the Equipment tab, this shows the Companions Armor and Weapons you currently hold in your inventory as well as what your Companion has equipped.

Beyond the Companion Menu, dialogue with your companion is also a way to get to know them better and their responses will vary based on rapport, quest status, and other factors.

Companions can be customized using many of your own cosmetic collectibles. This includes mounts, costumes, and outfits. This is done by choosing the Companion Menu and then navigating to the Collectibles tab on the top-right.

Unlocked costumes may be applied through the Collectibles Tab, with any associated applied dyes being shared across your character and companion's appearance per costume. Visiting an outfit station allows you to configure a dedicated outfit slot, with each companion having a dedicated slot per account. This outfit can be activated through the overview screen of the Companion User Interface.

Note that a companion's head armor is automatically always hidden and will not be displayed regardless of equipment or cosmetic override settings. Additionally, a small subset of mount, costume and outfit collectibles may not be usable by the companion based on gender, race, or other restrictions.

To change their Default Mount, it is done the same way as you change their appearance. Simply click on the Mounts option to view all mounts you have currently unlocked, and avail be to your companion. 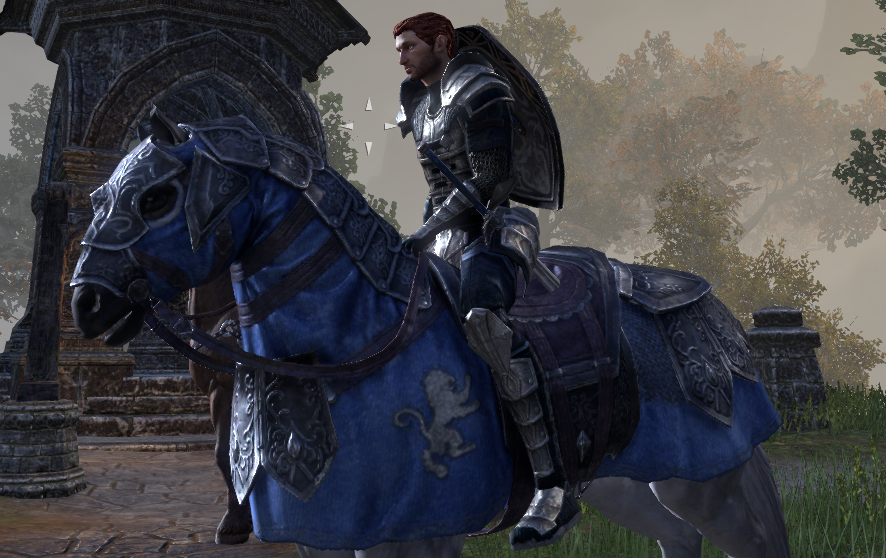 Companion equipment is distinct from player gear. Their equipment does not have levels, cannot be enchanted, does not require repairs and does not include a style appearance. You can purchase White companion gear from Weaponsmiths (1H, 2H weapons), Woodworkers (staves, bows), Armorers (Heavy Armor), Leatherworkers (Medium Armor), and Tailor (Light Armor) merchants throughout the world allowing you to customize your Companion from the start. You can find builds from three content creators on each of the Companions individual page. (See Tabs at top)

Note: The Armor and Weapon merchants are NOT the ones residing near crafting areas. You are looking for NPCs of the various trades; ex: Weaponsmiths, who reside in markets. An example would be in Daggerfall (Glenumbra) just North of the bank at the "Daggerfall Trade District". 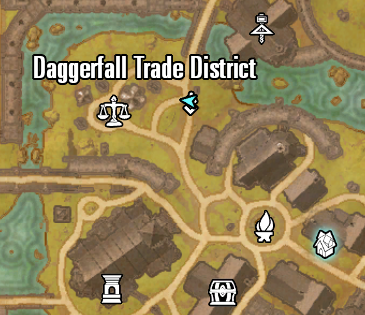 Companion gear can drop from all enemies in the game; however, boss level enemies have the highest drop rate. Keep in mind that your companion must be summoned to obtain the loot. This includes:

This equipment can be traded, bought, or sold on the market. Fine, Superior, Epic quality companion equipment with traits is obtained from monster drops throughout the world, particularly from bosses.

Equipment above White quality also comes with companion-centric traits. See table below for descriptions and what the chosen Content Creators use in their builds.

Companions have a strong personal preference which you can learn through dialogue and experimentation in the world. With your companion active, their opinion of you may raise or lower based on their observations. Rapport adjustments are displayed in real time in the loot stream (bottom right corner of your screen), and most actions have a cool down on how often it can be triggered.

As rapport increases or falls, various thresholds will be met, with corresponding changes in the companion's dialogue with you. The numeric value of a companion's rapport is usually hidden from a player (unless you are using an addon like Companion Frame) but can be inferred form the rapport status in the overview window of the Companion UI.

Companions are level 1 when unlocked, with a limited set of ability bar slots and a maximum potential level of 20. Companions level up via experience gained with your character through combat or from some quest dailies. Experience increasing effects such as holiday bonuses and consumable boosters applied to your character will provide an indirect benefit to the companion as well. As companions gain combat levels, their health and overall power (which affects weapon and spell damage) increases automatically, additional ability bar slots unlock, and more class abilities become available. This includes an Ultimate slot and ability, which unlock at combat level 20.

Companions start with 2 Skill Slots unlocked at Level 1, then progress:

While Companions will always attempt to engage in combat when you are attacked, you can also direct your Companions to engage with specific targets or tell them to pull back. By default, those commands are the same as Pet commands which are holding down the "Y" key and then Left Click (mouse) to send them to attack, or Right Click (mouse) to have them disengage in battle. In addition, peforming a heavy attack will also cause your Companion to switch to your target.

Once your Companions reaches Level 20 and has unlocked their Ultimate, they will utilize it when it's available and conditions are met. You may, however, choose to have them wait until directed by you. The Companion Ultimate Auto Cast setting is in Settings, Gameplay. This will present, next to your skill bar, a new Ultimate Icon that can be used by a Hotkey.

If a Companion dies in battle, they can be revived by using a soul gem. However, any Companion who is still defeated at the end of combat will revive with a few seconds of the battle concluding.

Your Companion's DPS, tanking or healing rotation is based on the order of the skills arranged in their Skill Bar that's the same as a player's skill bar, if they have a valid target and meet any associated requirements of the ability. Companion abilities utilize a cooldown system, as opposed to GCD per cast for players, to determine frequency of usage.

Companion class skills resemble those of certain player classes, but organized into separate skill lines suiting damage, tanking, and healing. Companion armor skills are likewise broken down into light armor for healing, medium armor for damage, or heavy armor for tanking; this means that a companion who primarily uses spell damage attacks might be better equipped with medium armor, in contrast to player characters for whom light armor is optimal for spell damage.

Companion abilities do not require skill points to unlock and do not rank up or morph over time.